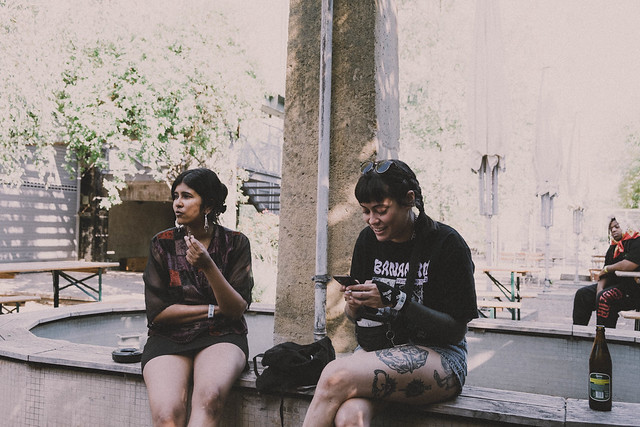 It almost feels reductive to call Zulu a metallic hardcore band, because their music is so much more than that. Both their 2019 and 2020 EPs are packed with emotional lyrics, spoken-word poems and tearful audio clips about the systemic violence that Black Americans are forced to endure under the rule of their country’s white nationalist patriarchy. Their nasty riffs, cop-crushing mosh parts and speckles of powerviolence blast beats are tremendous, but they mostly function as a compelling medium to host their urgent message to white audiences: „It’s up to you/And you alone/Make that change.“
Photo: Austin Durant The five piece band formed at the end of 2010 in Berlin. The music is a melodic mixture of 80's and 90's punk and hc, going along with aggressive german vocals about the huge amount of inputs, motions and resulting emotions people have to arrange and work with in the nowadays modern, nervöus world! Queer-feminist, anti-racist, anarchist hardcore-punk band, based and born in Berlin in 2016. Their music is a place for frustration and anger, a promise of mutual support, of not giving up, of creating utopias and making a change. As a feminist punchline machine, Deutsche Laichen argues extensively about sexism, toxic masculinity (machoness) and cops on their first LP. Their new songs are about racism - within their own environment, the DIY music scene and the left-wing bubble. With the criticism of white structures and the white music scene, which also does not seem to have any further problems with it, like performative solidarity and white party/feel-good feminism are declared war. Producer and record lover from Rio de Janeiro, who's been living in Berlin since 2012. He will give us the honour of a Vinyl DJ set with music of the african diaspora, connecting the brazilian tradition with the most modern expressions based in african music. From Samba, through Afrobeat, till Dub and Baile Funk.
//
MY PEOPLE RECORDS it’s an Intersectional Hardcore-Punk D.I.Y. Record Label based in Berlin-Germany, with the goal of highlighting bands with BIPoC, Woman identified and/or LGBT*I Queer members primarily. It’s run by a non European Black immigrant woman. https://mypeoplerecords.com/
.
DECOLONOIZE is a Berlin-based collective of BIPoC alternative musicians and music lovers. We are committed to organizing inclusive shows and events and creating safer spaces for a diverse community that is underrepresented in the Berlin punk and alternative scene. https://decolonoize.com/
.
Venue: KANTINE AM BERGHAIN
Doors: 18:00 / First band: 19:00
Tickets: https://www.eventbrite.com/e/zulu-usa-nervous-eat-my-fear-deutsche-laichen-tickets-308439911077?keep_tld=1